The function of a geotextile filter is to allow water to enter a drainage media (such as gravel or a geosynthetic) while preventing soil particles from doing so. Whether using drainage stone or a pre-formed polymer drainage core, a geotextile filter is required in order to provide drainage performance for the lifetime of the project. This technical note discusses key properties of filtration geotextiles and how they function.

A geotextile can be designed to match a particular soil but this is often not necessary as non-woven geotextiles are manufactured as standard to be compatible with the majority of soils. However, there are difficult soils and complex applications which are discussed in a later section. Note that the pore size should be specified as a range or a maximum value.

The permeability of a geotextile must be greater than that of the adjacent soil. This means that the flow rate of water through the geotextile is greater than that of the water flow rate in the soil so that the geotextile does not become a pinch point for the movement of water from the soil into the drainage media. The permeability of soil may be 1 x 10-8 m/s or lower for a cohesive soil, or up to 1 x 10-4 m/s for sand.

A typical non-woven geotextile will have a perpendicular water flow of around 100 l/m2·s at a 50mm hydraulic head which is at least 1,000 times more than that in typical soils.

Therefore in most situations, the factor of safety for permeability is very high, even allowing for some minor reduction in the flow performance of the geotextile over time.

How a Non-Woven Geotextile Filter is Formed 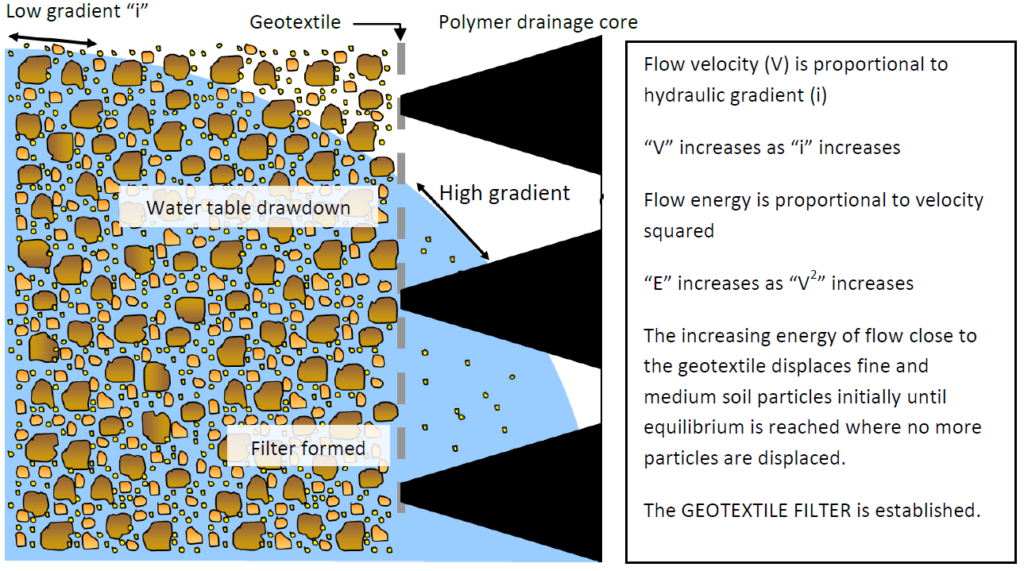 All filters clog to a certain extent, whether geotextile or any other material (e.g. stone). However, as noted earlier filter geotextiles are far more permeable than soil – allowing at least 1,000 times more water flow than typical soils. Even if a geotextile loses 99% of its flow capacity, it will still provide adequate flow. So rather than asking ‘will it eventually clog?’ a more perceptive question is ‘will it excessively clog?’ The answer to that question depends on the site conditions.

In common conditions, good quality filter geotextiles will not excessively clog. Common conditions are where the soil and water conditions do not fall into any of the categories below. This is backed up by numerous case studies and laboratory experiments such as (Fannin, 2010; Giroud, Luettich, Richardson & Zhao, 2002; Koerner, 2012). A good quality filter geotextile is one that complies with BS 8661:2019.

Experience shows that the following conditions give rise to concerns about geotextile filter applications and indeed also cause problems for traditional filter stone (Koerner, 2012):

In common soil conditions, good quality filter geotextiles selected in accordance with BS 8661:2019 will maintain good long term filtration performance. In uncommon conditions (such as those outlined above) specialist advice should be obtained regarding the most suitable option for providing filtration.

Fannin, R. J. (2010). On the clogging of geotextiles. In 9th International Conference on Geosynthetics. Guaruja, Brazil.