Creep is defined as the time dependent deformation of a material under maintained loading. It can occur in both (ex)tension and compression. It occurs in all construction materials, although it is arguably most significant in polymer materials.

Historically, compressive creep is measured in accordance with BS EN 1897 which defined a standard test applied over a period of 1,000 hours. The Standard defines a range of standard pressures up to 200kPa, but it is common practice to test at different pressures and for extended periods. Extension of creep testing to 10,000 hours is realistic in certain circumstances. In 2008 a new Standard for compressive creep testing, BS EN ISO 25619-2, was published.

It describes essentially the same testing procedures, but introduced subtly different definitions of strain which alter reported values of creep slightly. For low creep materials such as Pozidrain Protector at or below its rated service pressure, the differences are small.

The first graph illustrates a typical “family” of conventional compressive creep test results for Pozidrain Protector 745 at a range of normal pressures, up to and including its nominal service loading. The maximum creep compression is very marginally more than 5%. 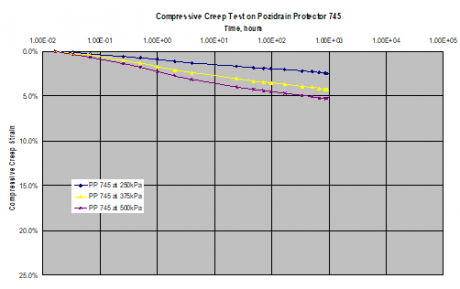 The Standard also provides a procedure for testing under combined normal and shear loading. Where a drainage geocomposite on the base of a landfill might experience purely normal (perpendicular) loading, a similar product on the side slope of the same landfill would be expected to experience both compression normal to the slope and a shear loading parallel to the slope. The Standard defines a shear component of 20% of the normal pressure – corresponding to a 1:5 inclination – which is shallower than common landfill side slopes. ABG have undertaken combined compression and shear creep testing on selected core material at 1:3 inclination. The second graph illustrates such a test on Pozidrain Protector 745.

It is theoretically possible to combine a wide range of pressures, durations and inclinations; the consequence of this is that it is possible to generate a large number of potential tests.

The result of these influences is that it has become necessary to find ways of accelerating the assessment of creep performance.

The conventional way of accelerating creep testing is to undertake the testing at elevated temperature. There are, however, limits on the extent to which such testing can be accelerated.

A range of techniques have been employed to both generate this accelerated behaviour and to interpret it in terms of behaviour at normal temperatures. A relatively recent and extremely powerful technique is the Stepped Isothermal Method (SIM). 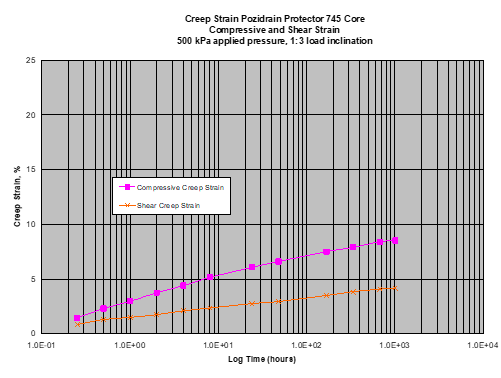 The Stepped Isothermal Method was initially developed for tensile applications. The technique has been extended to compressive creep both in the USA and in the UK, where Dr J Greenwood of ERA pioneered compressive SIM testing for ABG. Since that time, the procedures have been standardised and are described in ASTM D7361:2007.

In a SIM test, a specimen is loaded at a series of temperatures and the initial creep deformation is measured at each temperature. The results of the creep deformation at each temperature are transformed mathematically and combined into a single creep compression plot. An example of such a test undertaken on the drainage core of Pozidrain Protector at temperatures of 20°, 30°, 40°, 50° and 60° is shown in the third graph. It is critically important that the results of SIM testing of a product type are interpreted together with the results of conventional testing. This has been done for Pozidrain Protector with close agreement between SIM and conventional testing to 1,000 hours. The graph also illustrates the very close correlation between the two techniques for a sample of Pozidrain Protector.

The principal benefit of the SIM test procedure is that it has become possible to get a reliable assessment of the long term creep compression behaviour of a product within a few days. Each test is performed on a single test specimen. This procedure eliminates the scatter which inevitably occurs between tests on different specimens and provides much greater confidence in the prediction of creep performance. 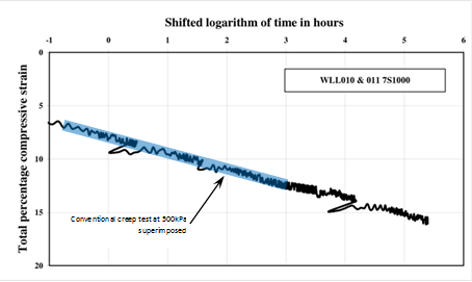 Please note that the above graph plots compressive strain against time and that the initial “elastic” strain should be deducted to assess creep. In the example graph there is an initial strain of 6.5% and a time dependent compression of 8.5% after 105 hours. Any measurement of properties such as inplane flow, where the product is tested under load, already incorporates the initial strain.

The on-going ABG programme of SIM and conventional compressive creep testing gives ABG confidence in the reliability of the acceleration technique. As part of that on-going programme of testing, ABG have tested a wide range of cuspated cores of various strength grades and at pressures of up to 1,000kPa. ABG will be pleased to discuss the detail of creep testing of their products and to collaborate in the performance of specific testing.