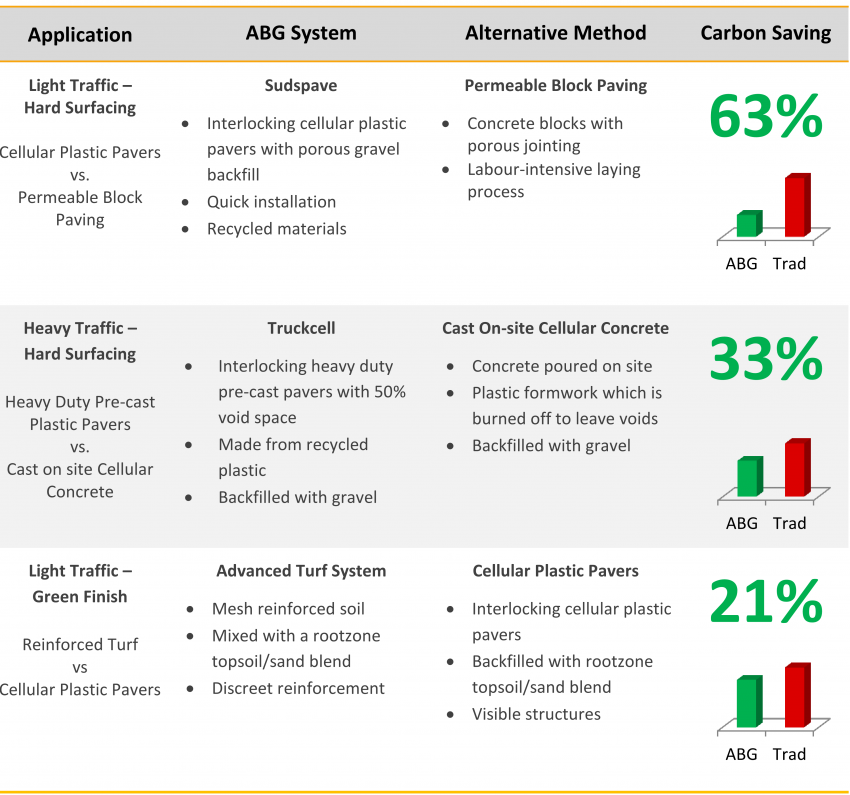 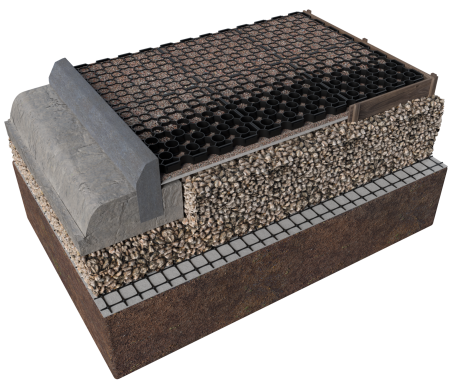 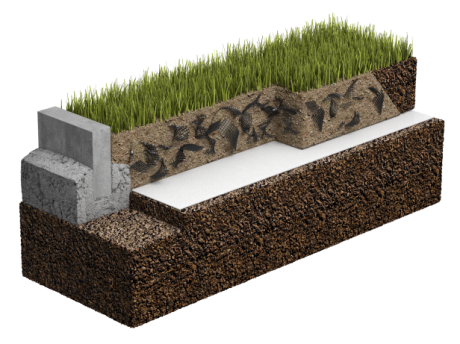 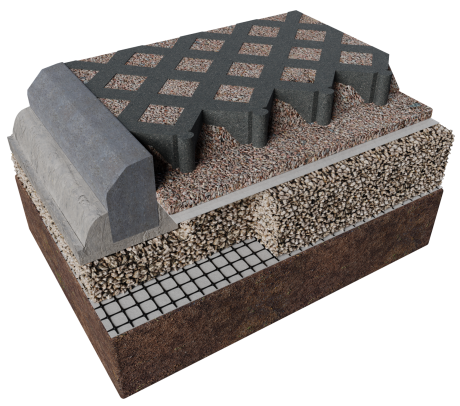 The fuel efficiency of the vehicles used is assumed to be 4.4 miles/L (the measured fuel efficiency of ABG lorries). The carbon footprint of burning diesel is assessed as 2.67 kgCO2e/L based on the value given for ‘Diesel (average biofuel blend)’ in the DEFRA report (Department for Environment Food & Rural Affairs, 2018).

The transportation of imported materials is based on the installation site being 100 miles from ABG and 5 miles from the nearest quarry. Fuel economy is estimated as 4.4 miles/L. The weight of material transported varies for each item. The carbon footprint associated with construction is based on estimates where possible and ignored in more complicated situations for simplicity of calculations.

This assessment was based on cast on-site porous cellular blocks compared with Truckcell. Cast on-site porous cellular concrete blocks are a system which consists of an egg-carton shaped plastic mould being laid on a prepared sub-base/bedding layer. Steel reinforcing bar is then placed in the mould and concrete poured to form a honeycomb shape (visually similar to Truckcell). The exposed plastic mould is then burnt off and the exposed voids are backfilled with (in the case of hard surfacing) porous gravel. So the carbon footprint of the cast on-site porous cellular blocks is based on 1) the embodied carbon of the plastic formwork, concrete, reinforcing steel and gravel backfill and bedding; 2) the carbon released when burning off the exposed plastic former, 3) the transport of all elements to site. The plastic former is assumed to come from a specialist supplier 100 miles from site (as per ABG materials) whereas the concrete and steel from 5 miles from site.

This assessment was based on cellular plastic pavers compared with ABG Advanced Turf System (ATS) – a porous turf reinforcing system comprising mesh elements blended with sandy rootzone growing media. It is assumed that the rootzone/topsoil is carbon neutral due to the carbon absorbed during the life of the vegetation (typically grass) planted. The carbon footprint of the ATS is based on the embodied carbon of a typical 200mm thick surfacing with 5.4kg of mesh elements per m3, a separation geotextile at the base and transportation of materials to site. The embodied carbon of the mesh elements is based on the recommended value for PP geogrid (Raja, 2015). As ATS requires a specialist to mix the mesh and rootzone, the transportation to site is based on a 100 mile journey as with other ABG products. The carbon footprint of the cellular plastic pavers is based on the assessment for Sudspave (see ‘Light Traffic – Hard Surfacing’) but with the gravel backfill and bedding being replaced with sandy rootzone backfill (40mm) and bedding layer (50mm). As with ATS, the rootzone is assumed to be carbon neutral, but transported from 5 miles away rather than 100 miles.

Wilson, S. (2018) A14 Deckdrain Back of Wall Drainage, Costain Case Study [Not yet published]