Introduction
Expansion of the built environment and the growing footprint of towns and cities introduces ever more impermeable surfaces that generate high surface water runoff. With the trend coinciding with more intense rainfall events, flooding is becoming a common and expensive problem to be mitigated as part of new and refurb developments.

The key sustainable urban drainage solution (SuDS) design is the principle of dealing with rainwater as close to the source as possible. 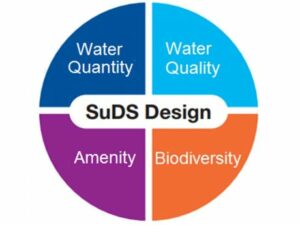 When it comes to the range of Sustainable Drainage System (SuDS) techniques available to local authority planners and property developers, Blue Roof systems tend to be one of the least well known options, partly owing to their being a relatively new concept.

A blue roof controls and limits the rainwater flow from the roof ensuring that the drainage system below is not overwhelmed. Rather than being thought of as storm water storage, Blue Roofs are only designed to provide temporary storm water attenuation. For around 95% of the time the roof drains as normal via the rainwater outlets and it is only in the event of heavy and prolonged rainfall that the Blue Roof system begins to restrict the discharge rate of rainwater. A typical system design will see the Blue Roof’s attenuation voids begin to fill up as rainfall intensifies, before it drains to empty over a 12 hour period. In this way, water does not cascade rapidly from rainwater outlets and overburden the local storm water drains, sewer and river networks. 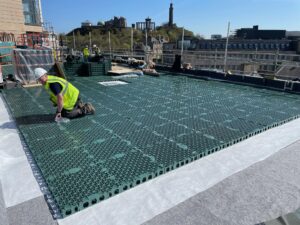 Rainfall Data
Designs are typically calculated to model the drainage of the roof to match a 1 in 100 year storm event plus a 40% allowance for the effects of climate change. Geographical location and orientation are an important part of the calculation and the average amount of rainfall in that location and the prevalent wind direction are considered. In the UK, values are taken from either the flood studies report (FSR) or flood estimation handbook (FEH 2013), depending on which is most relevant to determining the exact storm design.

Restrictor chamber
Key to controlling the discharge rate from the roof is the restrictor chamber and these are positioned above rainwater outlets to restrict the flow rate of storm water.

As the void formers fill, the chambers have a series of inlet positions that slow the volume of water entering the drain. The chambers include a geotextile filter to prevent leaves and debris from blocking the outlets, whilst also providing a filtration function. 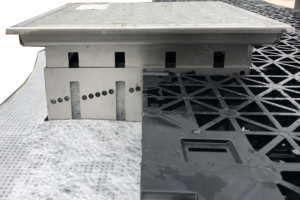 Water quality
Installing a Blue Roof system has a positive impact on the quality of the water discharged as a result, and before the water reaches the roof outlet, it has passed through several filtration layers to remove particulates and pollutants. Even if the surface finish isn’t green, the water has passed through at least two layers of filtration, with water treated to such a degree that it reaches the level required in treatment train stage one of the SuDS process, allowing it to be released from the roof directly into the river or sewer systems.

Loading implications
The introduction of a Blue Roof doesn’t usually, but may have loading implications for the structure of the building, and a structural engineer should be consulted at an early stage to determine any constraints. These are often not as onerous as might be expected however since the Blue Roof attenuates collected water across the entire area of the roof at a shallow depth, typically less than 100mm. At full capacity this would only exert a maximum additional load of 1.0kN/m2. Components are available and designed to cover nearly all loading eventualities including; landscaped areas, podium decks for emergency fire and HGV vehicle access and large HVAC plant and Solar PV installations.