The federal region of Styria has some 100km of tunnel in operation. In the 10km long Plabutsch tunnel, a second bore was opened in January 2004 making it the longest unidirectional road tunnel in Europe. The tunnel was equipped with the most up to date safety installations. The original Plabutsch tunnel was opened in 1987 as a single bore tunnel with bi-directional traffic and was built to take the traffic away from the old town of Graz with its famous Eggenberg Palace. The continuing increase in traffic forced the construction of a second tunnel. Both bores were brought up to the latest standards.

The increased safety for tunnel users was one of the main objectives of the design. The costs of the safety installations in both tunnels amounted to some 33M€. Improvements to the materials in both bores meant meeting high reaction to fire standards. The first bore needed upgrading and it was found that some areas of the invert of the tunnel were suffering from groundwater infiltration causing soft ground and a breakdown of the cement stabilised base layer under the structural concrete. To provide a satisfactory structural solution with adequate drainage capacity using traditional methods would have required the excavation of an additional 250mm of rock from the tunnel invert, plus the installation of a gravel drainage layer with associated separation and filtration geotextiles along with a geomembrane to protect the base course. A large number of service ducts were below the invert which would also have to be carefully removed and replaced before the replacement concrete floor was cast.

The Deckdrain 6S500 geocomposite drain with an overlying fire retarded Terrex Protector geotextile was used instead of the drainage stone, providing higher flow and reducing the dig from 250mm to 20mm, thereby avoiding the need to lift and reinstall service cables. The high strength core was able to withstand the wheel loads of the concrete delivery vehicles feeding the extruder which laid the floor slab onto the Deckdrain. The Deckdrain core has an impermeable upper surface to prevent water ingress into the cement stabilised base course. Lateral drainage pipes every 52m under the Deckdrain took water to the main invert drainage system.

The ABG technical team provided all the drainage and loading calculations. The product was supplied pre-welded on 4.5m wide rolls, with a 300mm overlap on one edge to integrate with the other drainage systems.

Contact ABG today to discuss your tunnel project specific requirements and discover how our past experience and innovative products can help. 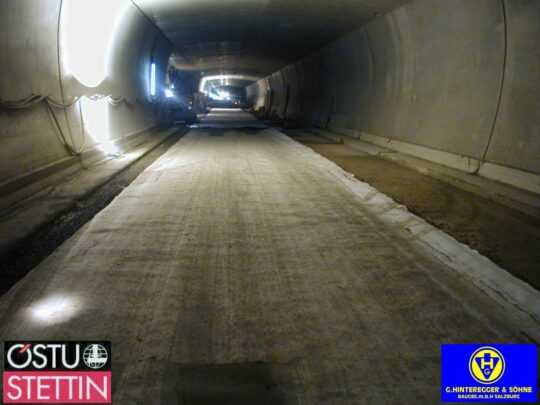 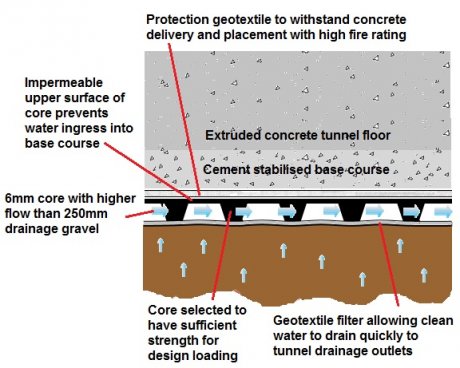 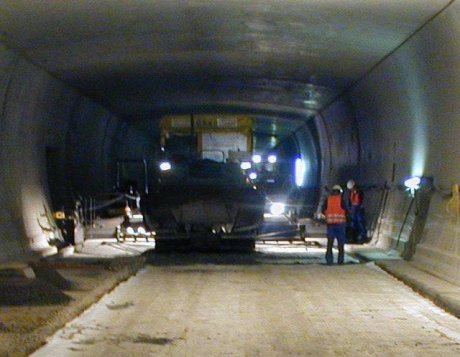 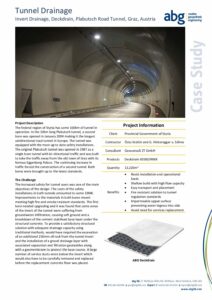